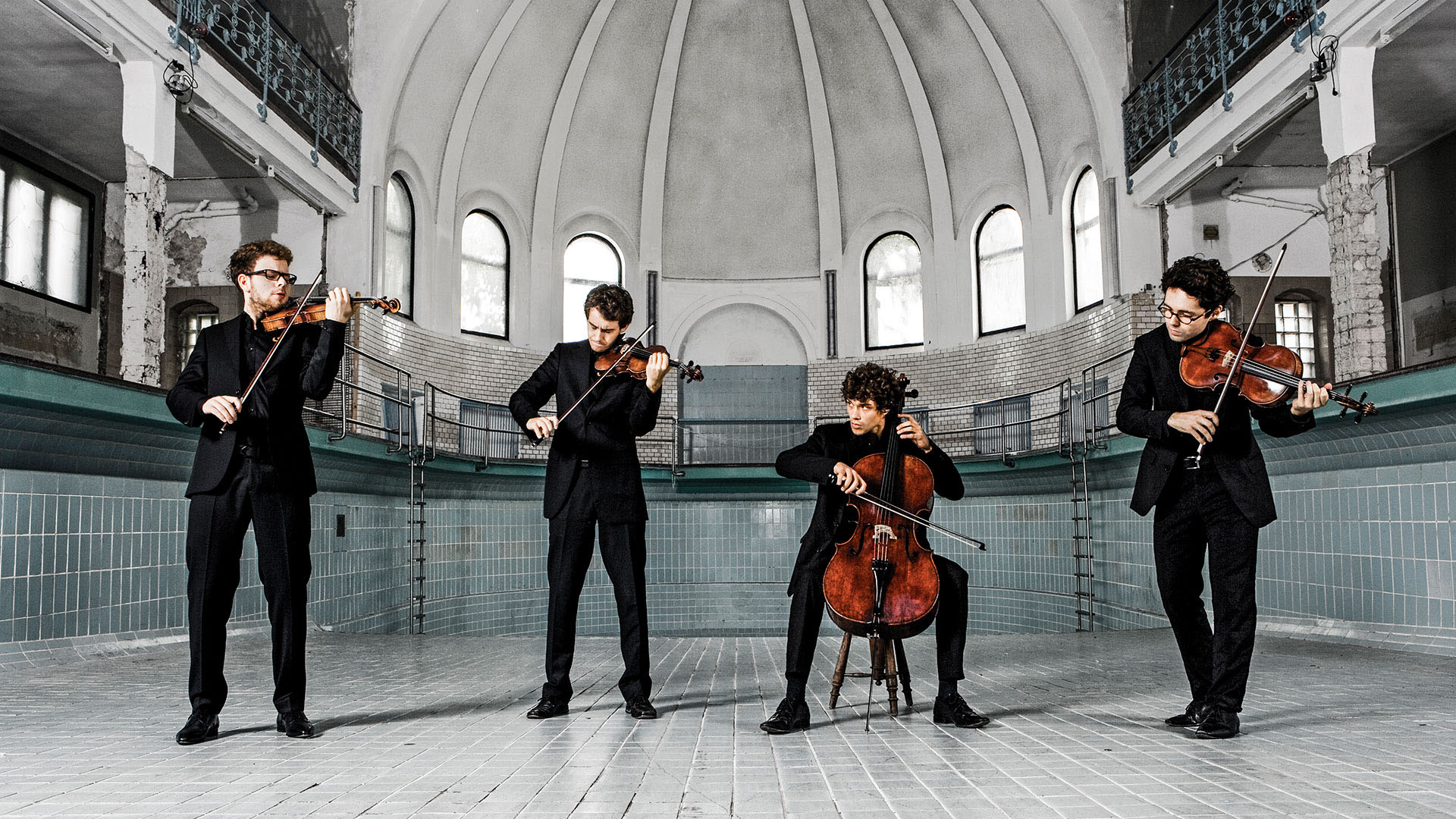 Encke, Jakob, 1st violin Stoll, Daniel, 2nd violin Stuart, Sander, viola Disselhorst, Leonard, cello
Founded in 2012 and based in Berlin, the vision string quartet has already established itself as one of the finest young string quartets of its generation. With unique versatility that focuses on the classical string quartet repertoire alongside their own compositions and arrangements of other disparate genres, the four young musicians are on a mission to re-address with integrity how classical music is presented and perceived by both new and traditional audiences. Their distinctive characteristics of performing all their programmes standing up and completely from memory lend its performances an added intimacy and intensity which has been widely praised.

2016 was a year of remarkable achievement for the Quartet as they achieved not only first prize in two major competitions but all the audience and special prizes too. Adding to their successes at Felix Mendelssohn Bartholdy Competition in Berlin at the beginning of the year and at the International Concours de Génève at the end of the year, they were also awarded the prestigious Würth Prize in November 2016, only a month after they had received the audience prize at the Mecklenburg-Vorpommern Festival.

The young quartet experiments with innovative concert formats which they have brought to leading classical concert halls such as the Gewandhaus Leipzig, Tonhalle Düsseldorf, Konzerthaus Berlin and Philharmonie Luxembourg as well as to prestigious festivals including the Festspiele Mecklenburg-Vorpommern, Rheingau Music Festival, Schleswig-Holstein Music Festival, Heidelberg Frühling and the Lucerne Festival. They have hosted concerts in complete darkness, have collaborated on projects with renowned ballet dancer and choreographer John Neumeier and worked together with lighting designers to bring further creative dimensions to their performances.

Live recordings of its concerts are regularly broadcast by German radio stations such as NDR, SWR, Bavarian Radio, WDR, Deutschlandradio Kultur and RBB. Since April 2015, the vision string quartet has been on the "SWR2 New Talent" programme, which accompanies selected stars of the future for more than three years and promotes them in concerts, interviews and CD productions.

The quartet studies in Berlin under the Artemis Quartet and Günter Pichler of the Alban Berg Quartet at the Escuela Superior de Música Reina Sofía in Madrid. In addition they have received tuition from teachers such as Heime Müller, Eberhardt Feltz and Gerhard Schulz, as well as participating in masterclasses at the Jeunesses Musicales, ProQuartet in France and the Foundation Villa Musica Rheinland-Pfalz where they were scholarship holders. Chamber music partners include Jörg Widmann, Eckart Runge from the Artemis Quartet, Haiou Zhang, Edicson Ruiz and the Quatuor les Dissonances.

In summer 2018 they will record their debut CD.