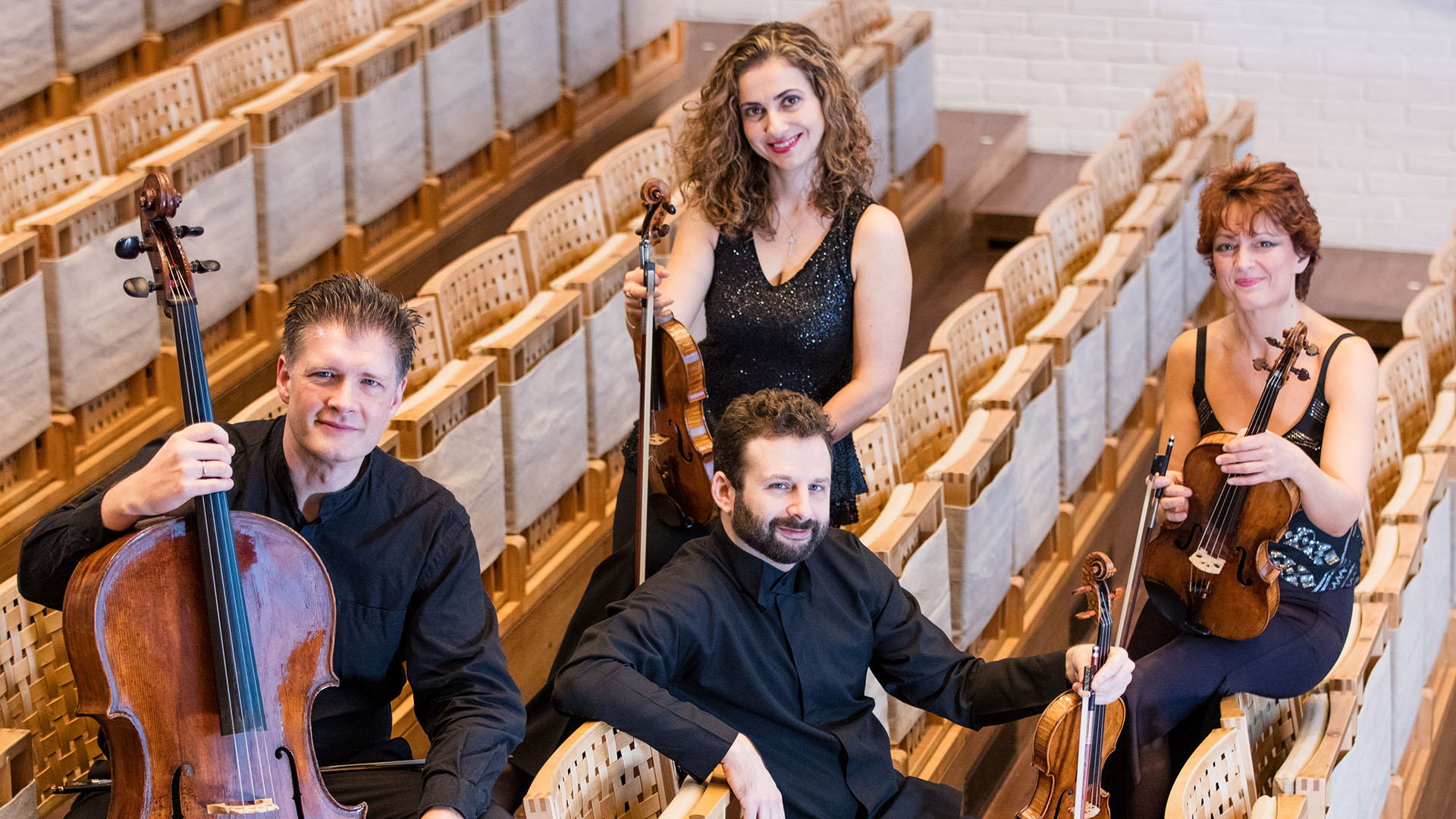 Gringolts, Ilya, 1st violin Kurtikyan, Anahit, 2nd violin Simionescu, Silvia, viola Herrmann, Claudius, cello
The Zurich-based Gringolts Quartet was born from mutual friendships and chamber music partnerships that cross four countries: over the years, the Russian violinist Ilya Gringolts, the Romanian violist Silvia Simionescu and the Armenian violinist Anahit Kurtikyan frequently performed together in various chamber formations at distinguished festivals; the German cellist Claudius Herrmann played with Anahit Kurtikyan in the renowned Amati Quartet. What unites the four musicians is the immense joy they get from performing together and their passion for the high demands presented by the string quartet repertoire.

They have already had the opportunity to collaborate with eminent artists such as Leon Fleischer, Jörg Widmann, David Geringas, Malin Hartelius, Christian Poltéra and Eduard Brunner. Aside from the classical repertoire for string quartet, they are also dedicated performers of contemporary music, including string quartets by Marc-André Dalbavie, Jörg Widmann, Jens Joneleit and Lotta Wennäkoski.

The Gringolts Quartet has attracted attention among reviewers and audiences with their exquisite CD recordings of works by Robert Schumann and Johannes Brahms. Together with David Geringas the Gringolts Quartet participated in the world premiere recording of Walter Braunfels quintet in 2012, which was awarded a "Supersonic Award," as well as an ECHO Klassik award. Their CD with quintets by Glazunov and Taneyev with Christian Poltéra was released in spring 2016 and was awarded the Diapason dOr. Recently, the quartet presented Schönbergs string quartets No. 2 and No. 4 on BIS records in 2017. The CD was referred to reverently in the press: Such a pleasing plea for Schönbergs music has not existed for many years and makes this CD the new recording of reference. (Klassik-heute.com, Martin Blaumeiser).

The members of the Gringolts Quartet all play on rare Italian instruments: Ilya Gringolts plays a Giuseppe Guarneri "del Gesù" violin, Cremona 1742-43, on loan from a private collection. Anahit Kurtikyan plays a Camillo Camilli violin, Mantua 1733. Silvia Simionescu plays a Jacobus Januarius viola, Cremona 1660. Claudius Herrmann plays a Maggini cello, Brescia 1600. Prince Golizyn who was a great admirer of Beethoven, gave the first performances of the composers last string quartets, which he commissioned, on this instrument.