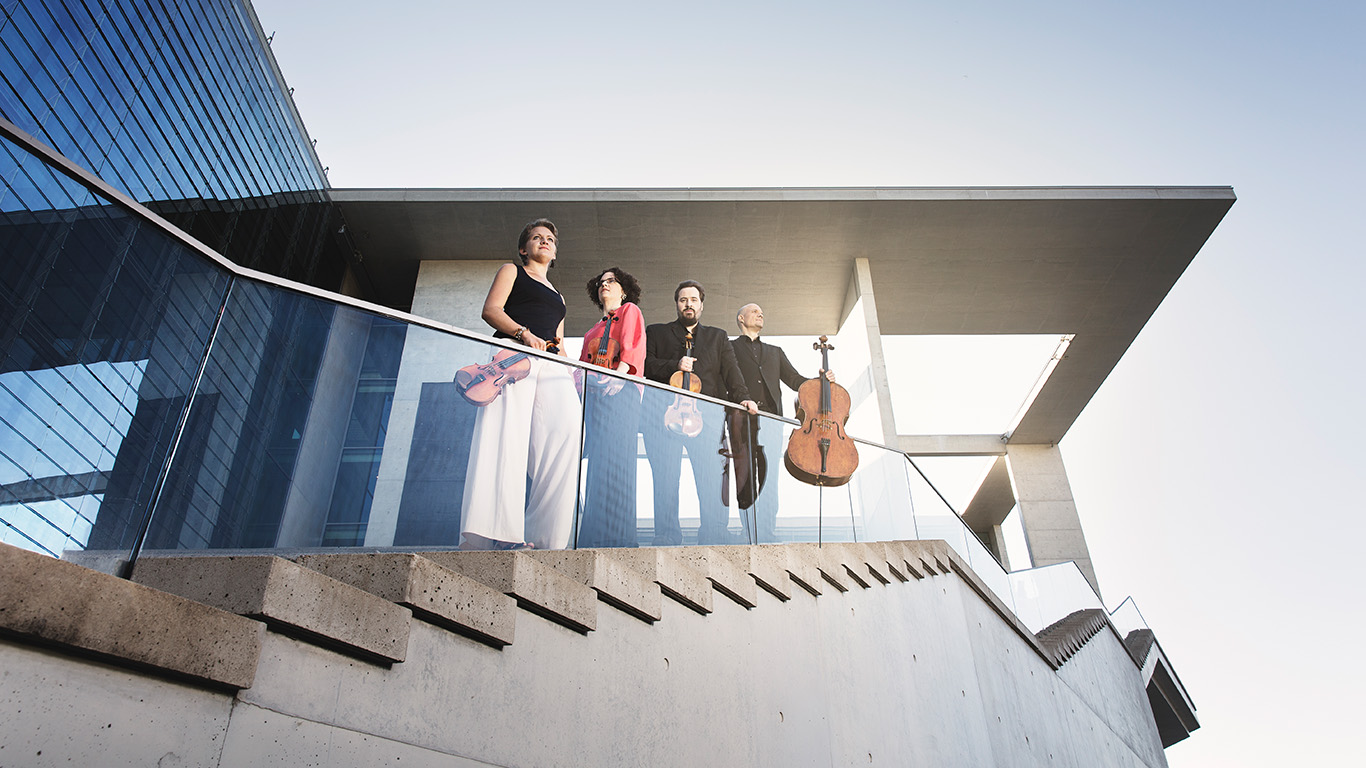  The interpretation of Artemis Quartet is not only technically on a par with the most virtuosic of their competitors  but it offers as well a higher musical intensity than all the others!

Berlin based Artemis Quartet was founded in 1989 at the University of Music Lübeck and is counted among the foremost worldwide quartet formations today. Important mentors have been Walter Levin, Alfred Brendel, the Alban Berg Quartet, the Juilliard Quartet and the Emerson Quartet.

Being awarded the first place in ARD competition in 1996 and six months later at Premio Borciani, made the quartet internationally successful. Yet the four initially followed an invitation of the Institute for Advanced Study Berlin in order to enhance their studies as an ensemble and to broaden them in an interdisciplinary exchange with renowned academics.

Artemis Quartet gives concerts for all great musical centres and international festivals in Europe, the United States, Asia, South America and Australia. Since 2004 the ensemble creates own cycles at the chamber music hall of Berlin Philharmonie, since 2011 at Wiener Konzerthaus (together with Belcea Quartet) and with the beginning of season 2016/2017 at Prince Regent Theatre Munich.

From the beginning the collaboration with musical colleagues has been a major inspiration for the ensemble. Thus, Artemis Quartet has toured with notable musicians such as Sabine Meyer, Elisabeth Leonskaja, Juliane Banse and Jörg Widmann. Various recordings document the artistic cooperation with several partners, for example the piano quintets by Schuhmann and Brahms with Leif Ove Andsnes, the Schubert quintet with Truls Mørk or Arnold Schönbergs Verklärte Nacht with Thomas Kakuska and Valentin Erben from Alban Berg Quartet.

Since 2005 the Artemis Quartet exclusively records for Virgin, today Erato and can by now look back on a large discography. Their recordings have been repeatedly awarded the The German Record Critics Award, the Gramophone Award, the Diapason dOr as well as the ECHO Klassik. The entire recording of Beethovens quartets for strings was honoured with the important french Grand Prix de lAcadémie Charles Cros in 2011.

Most recently released was a recording of creations of Mendelssohn-Bartholdy in 2014 (ECHO Klassik) as well as  dedicated to Friedemann Weigle  the recording of Brahms quartets op. 51/1 and op. 67 in fall 2015 (The German Record Critics Award).

Not least to increase the awareness for what is new in the field of established music, the examination of contemporary music is always a significant part of the artistic work of the ensemble. Composers such as Mauricio Sotelo (2004), Jörg Widmann (2006), and Thomas Larcher (2008) wrote creations for Artemis Quartet. In 2014 a concert for strings and orchestra by Daniel Schnyder premiered in Frankfurt. The musicians launched their own contest for musical composition in 2015. Eduard Demetz was nominated the awardee in November 2015 and his string quartet Nr. 2 will receive its premiere in Berlin in the first half of 2016.

Besides their practice in concerts, the four musicians teach as professors at University of the Arts Berlin and Chapelle Musicale Reine Elisabeth in Brussels.

After the tragic death of Friedemann Weigle in July 2015 Artemis Quartet restructured itself in the beginning of 2016 with Anthea Kreston at the second violin. Gregor Sigl took the position of the viola.